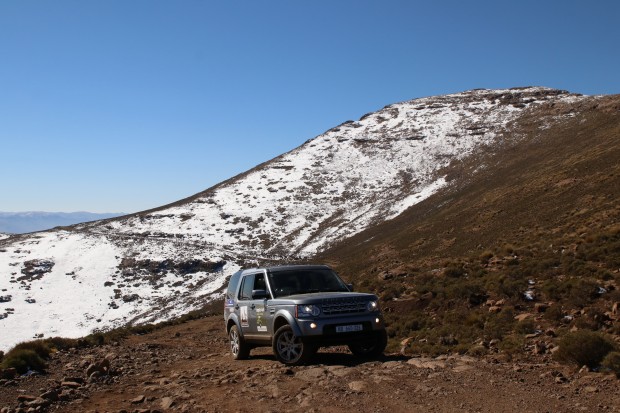 As it stood at 10pm while the team had settled in for the night, the plan was to rise at 5 am to get packed and going early! This was essential as we needed to travel to and harvest two spatially separated nests keeping in mind we needed to get back through border posts which close at 6pm.

Alas, our vehicles had other ideas. Overnight saw the temperature drop to a whooping -17°C and the diesel turned to goo! And as we were soon to find out, most vehicles don not like operating on gummy diesel.

luckily for the success of the mission, one of the two vehicles managed to get started, and our climber, driver, and project coordinator were on their way after a minor 45 minute delay.

Our second driver and videographer were not so lucky, and after 5 and a half hours of standing in sub-freezing temperatures, managed to get their engine swinging and on the road.

The delayed vehicle managed to catch up to the climbing team by 3pm, just in time to see the Bearded Vultures land back on its nest after the second nest harvest.  The climber transferred to the second vehicle which then rushed back in the direction they had come, arriving back at Sani Pass by 5:57 just in time to get into South Africa  before the gates were locked. Three minutes to spare!

The other vehicle headed west as the precious cargo needed ferrying through the border post of the capital, Maseru for official clearance. This drive would take them another 5 hours, and see them queuing for 3 hours at the 24-hour border post.

Posted On 10th August 2018 ~ 0 Comments
On Friday the 27th, the harvest team set out on “Mission Eastern Cape”! The week leading up had been filled with organizing and planning and