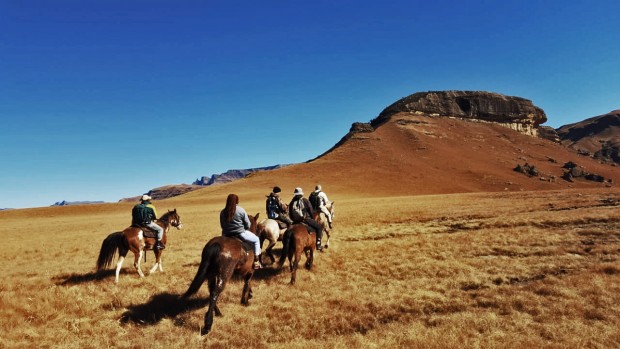 As disappointment seemed to precede disappointment, the Bred 4 the Wild team was clinging to the hope of a successful harvest as we approached our 13th and final nest.

We had two new team members, Tavish who joined us from the sanctuary and the infamous trail runner, Mr. Spurgeon Flemington. Spurge is a fit lad who very kindly agreed to lend us his legs. The legs in question were vital to walk the egg down safely and smoothly from the cliff-face nest while the rest of the althelitically challenged team rode on horseback. Mr. Charl Brummer was back in play and now climbing on home turf!

The Sanctuary team over-nighted in the KZN Wildlife squaredavel and arrived after dark but managed to get a good rest in before the dawn departure for the final day! The next morning started with a roar from the main house as Charl announced that coffee was ready! Spurge arrived shortly after and was briefed as to the plan of action. He then eagerly began his ‘walk’ up to the nest (Lets just call it his own special definition of ‘walking’ as he set a pace which saw him beat the team on horseback which followed shortly after).

Posted On 2nd November 2012 ~ 0 Comments
Children raise money for bearded vulture's new home. Eight-year-old Lea Conti had heard about the plight of the Bearded Vultures and that there was an

Posted On 21st August 2018 ~ 0 Comments
Operational logistics for the #Bred4theWild harvest team are obviously quite specific to each nest site. The challenge is always to get the team safely up

Posted On 6th July 2014 ~ 0 Comments
At the end of June, Fred and Karen Peters of the Manderston area organized two 10 000l water tanks to be delivered to the Sanctuary. Staff