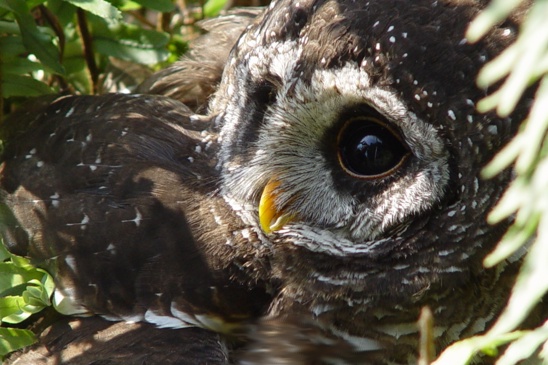 This species has a distinctive blue, nictitating membrane that closes protectively over the eye when they pounce on their prey. This prevents this forest dwelling owl from receiving ocular puncture wounds from sticks and branches.
The Wood Owls on display in Hoot Hollow are names Squiff, Co and Oscar Wol Squiff is a “real lady” and has been in our care since 2001. Even although she cannot fly people frequently return to visit her. Squiff gets her name because she has a mal-aligned beak – thought to be a hatching defect. She was found near Mooi River with a broken wing, after being hit by a car. She got into trouble when out hunting insects under the streetlights just after she left the nest. While being fed by her parents, her deformed beak probably didn’t cause her too many difficulties, but after she left their care she might have struggled to tackle tough-skinned rodents and so preferred to hunt insects instead. Squiff and Co (her blind wood-owl friend) lived together for five years until Oscar Wol joined them in 2006 in their man-made wood in the “Hoot Hollow” Owl house. Blind Co promptly laid an egg which she and Squiff amazingly incubated, hatched and raised together. The result… Woo! Since then these three owls have raised a baby every breeding season.