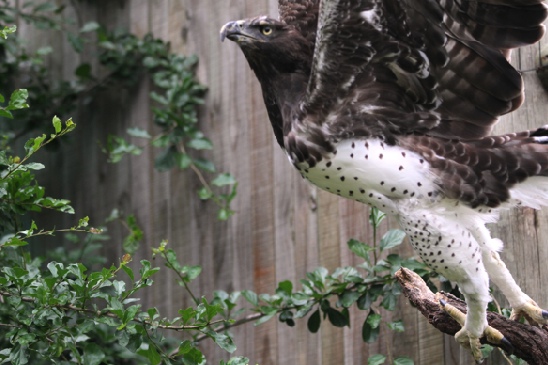 This species is the largest eagle in Africa and predates on small mammals (hare and small antelope), large birds (guinea fowl) and even monitor lizards. They hunt mainly on the wing, soaring above the bushveld, and can spot potential prey from up to 6km away. They are sadly often persecuted by farmers who perceive them as a threat to livestock. Martial eagles are now listed as Vulnerable in the RED DATA BOOK. The Martial living at the Sanctuary is called Sheba and she came into Raptor Rescue when she was still in her pale juvenile plumage she has now moulted into her adult feathers where she has a dark head and back. Even though large raptors are full grown in size at about eight weeks of age Sheba will reach full adulthood at about five years. She has a damaged vinculum on one wing; this tendon controls flight-feather movement. So although she can flap both wings normally she cannot control the use of the damaged one.