Volunteers Gardening in the Rain 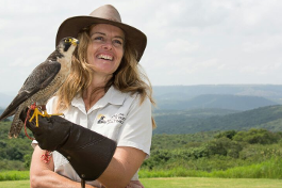 CEO, Shannon Hoffman began working full time with birds of prey in the year 2000. Trained in horse breeding and after also working in PR and environmental journalism, she began her ‘hands on’ raptor work in Dubai where she lived and worked in the Arabian desert with falcons, horses and camels. On returning home Shannon wished to use these raptor handling skills to translate the many threats that face our indigenous raptors into concepts that South Africans could see and understand. So, to increase public awareness of our amazing African raptor diversity, she initiated an educational facility in Botha’s Hill, called ‘On Air Raptor Displays’. Here she let the birds be the teachers by conducting free-flying displays for the next three years. In 2006 this public awareness facility was combined with the operations of the rehabilitation centre, Raptor Rescue, on the current property and the “African Bird of Prey Sanctuary” was born. Shannon now oversees the flying displays and public side of operations while concentrating on a new challenge to which her unique skill set is suited; that of managing the harvest and propagation of the critically endangered Bearded Vulture in the Bearded Vulture Captive Breeding Program.

Tavish joined us in January 2018 as a volunteer and became a full time staff member a month later. Tavish has been a keen birder from a young age and has become an essential part of our team. You can find him anywhere from the front desk, to presenting in the flying demonstrations or on fence-line patrol . He loves being outside and relishes opportunities to be in the bush, whether it be to look for snakes, birds, or other local wildlife. Tavish is now integral in our daily bird shows and is seen here with his favorite bird to fly, Roxy, our beautiful African Goshawk. He is devote Camo and Land Rover fan and would not be caught dead without at least one of the two in his possession! 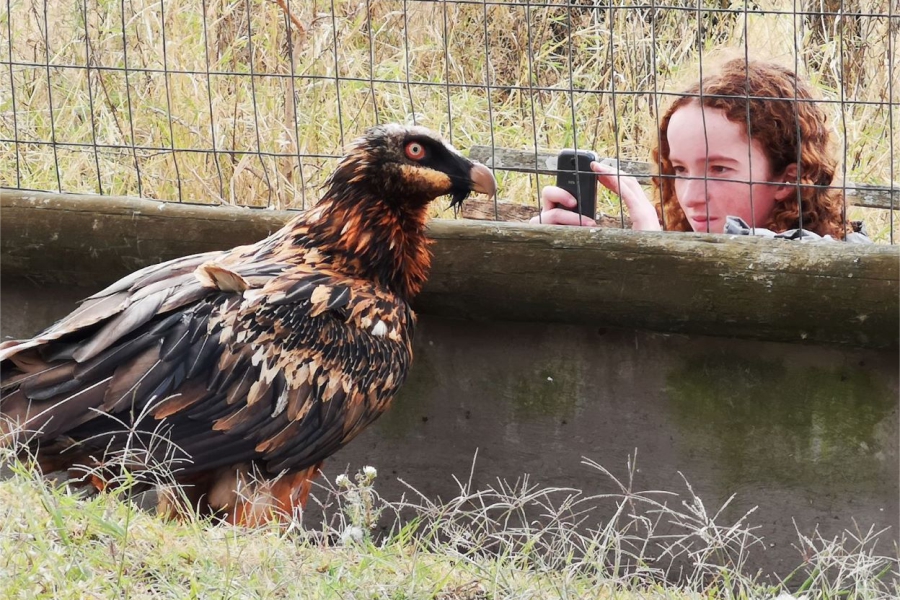 Front of House and Raptor Handler

Starting out as a volunteer in 2018, Mikayla is now a full time staff member. Mik primarily mans front of house where she is first to welcome you at reception. She also helps out at the daily flying displays and in the behind the scenes work for the critically endangered Bearded Vulture. Mik loves all things outdoors including running, hiking and sailing. Early mornings often include taking Bailey and Chester, the resident black labradors, for a run along the nature trail!  She is also a keen artist and assists in managing the Sanctuary’s social media platforms and in awareness material design. 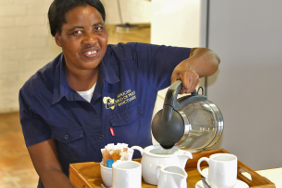 Sindy is also local lady and mother of one; although she commutes daily from the opposite direction in the valley to work. She is the front of house and café assistant and will happily provide you with a bite to eat should you feel a snack attack coming on. Sindy’s toasted sandwich or tea and cream scone will ensure that your all-round visit to the Sanctuary is complete. Sindy has worked in restuarants before and her steady smile should make you feel right at home. 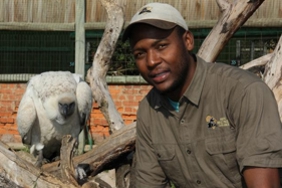 Lu Mlambo is a groundsman at the Sanctuary and joined the team in March 2012. Lu cares for the big raptors at the Sanctuary, so the eagles in Eagle Alley and the Vultures are his charges. Lu is also involved with the construction of new enclosures and enjoys tinkering on the maintenance jobs. The upkeep of the grounds is of course part of the day’s work and in summer time the grass grows as fast as Lu can cut it. We all rely on Lu to be our ‘power house’in any operation. Our gentle strongman indeed! 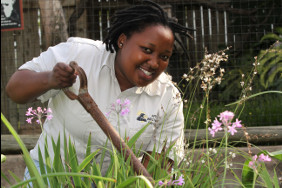 Hla started as a grounds-lady in January 2016. She maintains the owls enclosures in ‘Hoot Hollow’, is an avid gardener and helps out with relief work in the cafe. Hla says that she has learnt so many things already during her time at the Sanctuary. She says that she didn’t realize that creatures were just as important as people and that there was actually such a diversity within the raptor bird group. “An owl was just an owl and and eagle just an Eagle when I started,” says Hla with a laugh….but not anymore! Hla enjoys and communicates well with customers and she truly puts into practice the adage that a smile doesn’t cost you anything! 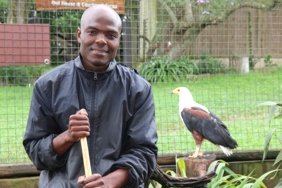 Wiseman Gcabashe is the second Sanctuary groundsman and animal husbandry assistant and joined the team in 2012. Wiseman also looks after the small livestock (rabbits and guinea pigs) and is meticulous in cleaning his Honeycomb Habitat enclosures. His favorite raptor is Neptune the Fish Eagle . Wiseman also assists with new enclosure construction and maintenance of the bird-park grounds. He is quiet, but always present and accounted for!