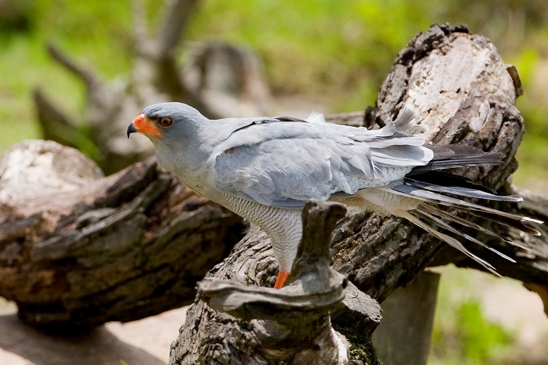 A species found in the drier arid zones of southern Africa and is very versatile in its hunting methods. It is one of the few African species recorded to hunt co-operatively behind the honey badger. The badger will be bumbling along foraging for his own food and has the strength to move a rock or pull off a piece of bark to reveal a juicy prey-item. The clever Pale Chanting Goshawk has worked out that if he shados the badger he can dash in at the last moment and steal some of his food. They are often conspicuously perched on telephone poles, scrub bushes and even on the ground.
An adult male called Maverick flies in the morning demonstrations and will show you how versatile they are on the ground as he forages for his food.His particular long legs that are indicative of the species make this ground movement possible as he struts his stuff with ease!