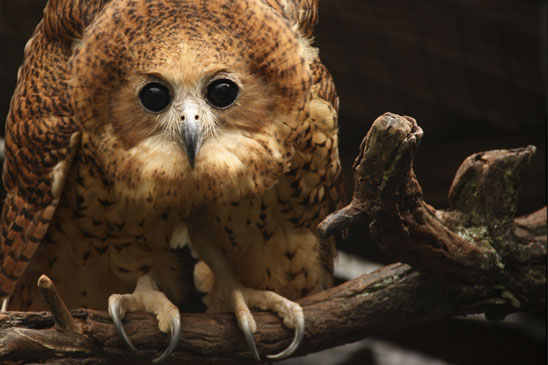 The Pel’s Fishing Owl is a large species of owl in the Strigidae family. It feeds nocturnally on fish and frogs snatched from the surface of lakes and rivers. The species prefers slow moving rivers with large overhanging trees to roost and forage from and they haunt the deeper pools of meandering rivers in riverine forest areas. It nests in hollows and the forks of large trees. Though two eggs are laid, only one chick is raised.

Pel’s Fishing Owl is one of the largest owl species in the world. It measures 51–63 cm (20–25 in) in length, spans around 153 cm (60 in) across the wings and weighs 2–2.35 kg (4.4–5.2 lb). They are well adapted to their aquatic lifestyle. Unlike most owls, they have minimal feathering on the toes and the tarsus, thus minimizing the amount of plumage that gets wet while fishing. Like diurnal raptors that specialize in fish, they have rough spicules on the bottoms of their feet that help them to allow them to catch slippery fish which they pluck feet-first from the river. Since hearing and auditory stealth is not important to its hunting techniques, this owl does not have strong hearing and does not have the soft edges to its flight feathers that most owls share, which makes them almost impossible to hear in flight.

Adults are rich ginger-rufous with dense dark bars to the upperparts and scaling to the underparts. The feathers around the head are loose and long, giving the head a shaggy very round-headed appearance. The tarsi and toes are unfeathered and straw-colored. The white throat is often largely obscured but can be puffed up in displaying birds during courtship. The flight and tail feathers are barred with lighter and darker feathers. The eyes are distinctly dark, often blackish in color.  Juveniles are more uniform buff  than adults.

The song of the male Pel’s Fishing Owl is a deep, sonorous, horn-like boom, first a single and then a higher pitched huhuhu. The male also utters a ringed hoot, much higher pitched than those of most eagle-owls, followed by a deep, soft grunt: whoommmm-wot or hooomm-hut. The calls of the male are repeated ever 10 to 20 seconds can be heard from up to 3 km away. The female’s songs are similar but are higher pitched and even in a double-note, i.e. hoot-oot. Females and young at the nest wail a shrill wheeoouuwhile anticipating food.