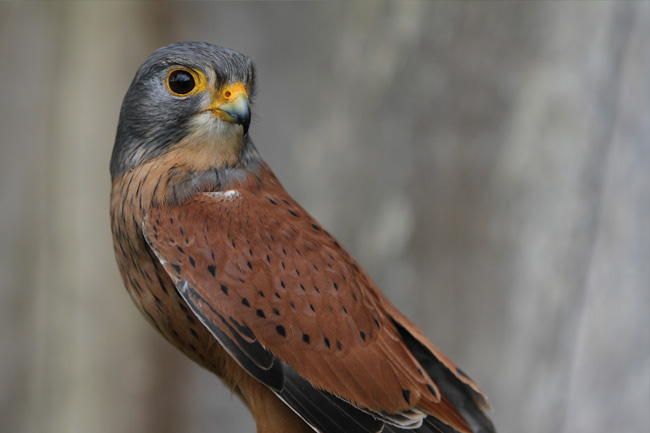 Rock kestrels are the most common of the small Falconidaes in southern Africa, and
although commonly seen in the dry semi-arid to arid areas, they are most often seen
in rocky mountainous habitat. Hence their name. You may see this little kestrel
perched up on electricity poles along the roadside, where it’ll be looking for any
unsuspecting prey walking past on the ground below; If there is no tall object to
perch on, they will ‘create their own’ by hovering in the air to inspect the ground
below. If they happen to see a tasty morsel they will parachute down holding both of
their wings back behind their back to enable them to drop at a greater speed. Prey is
caught on the ground and they feed mainly on small mammals, birds, insects and
reptiles.
Our pretty little pair that are housed at the Sanctuary are named Pip and Pebble and
always seem to have something to say. Years ago, they were used to help raise the
extra chicks of the rare Taita Falcon brood, as they were learning to become good
parents.