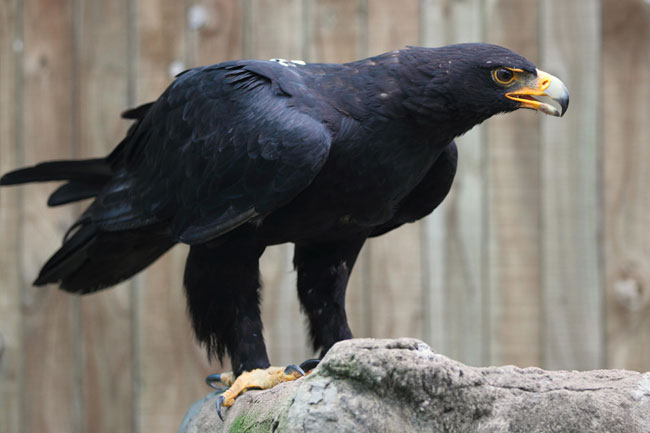 These cliff-dwelling black eagles live in territorial pairs and build huge nests to which they add sticks every year. The biggest nest ever recorded extended 4.1m high! They prey predominantly on dassies which share their mountainous home. These hefty little mammals can be two thirds the size of the eagle itself.

The Verreaux’s Eagles living in Eagle Alley are named Orca and Capone. You can identify the female, Orca, by her malformed talon. Capone the male is a beautiful black boy who  came from the Swartberg area in KZN. He has been deemed a stock killer by the local wildlife authorities and is therefore not to be released back out into the wild. His ‘wild and wooly’ days rampaging local livestock were as he deparately tried to survive his first months after fledging from the nest. He was eventually caught (attached to a farmer’s goose) and brought to Raptor Rescue. He was found to be starving and thus had resorted to crazy attempts at goose hunting as apposed to a more natural diet of rock hyrax and small mammals. His casting (a regurgitated pellet of undigestible matter from his meal the day before) that first night in captivity showed just how much trouble he was actually in! The pellet revealed that he had been so desparate for food that he had in fact resorted to eating insects and only their exoskeletons were left behind! There’s a very fine line perhaps between an ‘aggressive killer’ and a young bird desperate to survive.