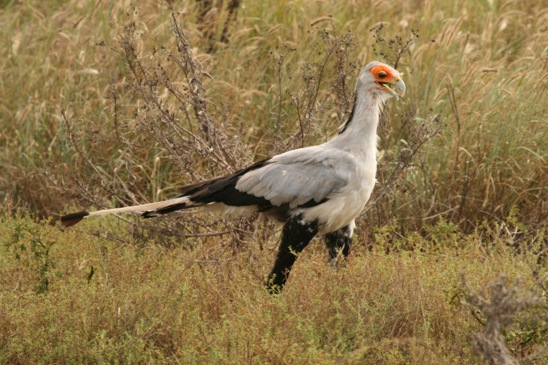 With their long, stork-like legs and pedestrian lifestyle, the dignified Secretary Bird breaks all the raptor rules of design and function. They are grey in colour with loose erectile feathers on the back of their heads. The name ‘Secretary Bird’ refers to these quills on the back of its head looking like quill pens of an old-time secretary. The Arabic name anglicized into ‘saqr-et-tair’ calls it a hunter or hawk bird. Their flight feathers, legs and belly are black and their protruding tail is banded. Their two centre tail feathers are very long and extend way past their legs in flight. Juvenile birds have a yellow face and grey eyes. In adult birds, their face becomes pink and their eyes darken to brown. They make a deep gonk, gonk, gonk croaking vocalization.

Secretary birds can often be seen in pairs marching through grasslands looking for food and can cover up to 30km a day They bend down to seize smaller food items, like insects, in their bill, but they stamp on more agile prey with their feet. They will flush prey out of long grass in a similar manner and have a very wide gape to enable them to swallow anything from a rat to a small hare whole. They also prey upon the nestlings of ground-dwelling game birds and their long legs even allow them to hunt venomous snakes. By ingesting pebbles they aid the digestion of exoskeletons or tougher meals.

When pushed, Secretary birds run and then leap into flight with deep, slow wing-beats. They have been recorded soaring on thermals at heights of two to three thousand metres in altitude. In courtship they portray undulating flying displays or run around together on the ground with raised wings. They build their nests on the very top of trees and always have a panoramic view. These exposed nests do, however, leave the chicks very vulnerable to predation by other birds. Every year they improve and renovate this structure by carrying sticks and grass to the nest in their bills.

The female incubates the eggs and the male brings her food for the 42-day incubation period. Two to three chicks are born a couple of days apart and there is little sibling rivalry. The male brings food held in his crop and he regurgitates it onto the nest. The female promptly swallows the offering and in turn, regurgitates it later for the chicks. At about 60 days, the young secretary birds begin their wing exercises and by now food is merely left on the nest for the chicks to eat themselves. When learning to fly, youngsters can also be seen mock-stamping practicing their ‘kills’